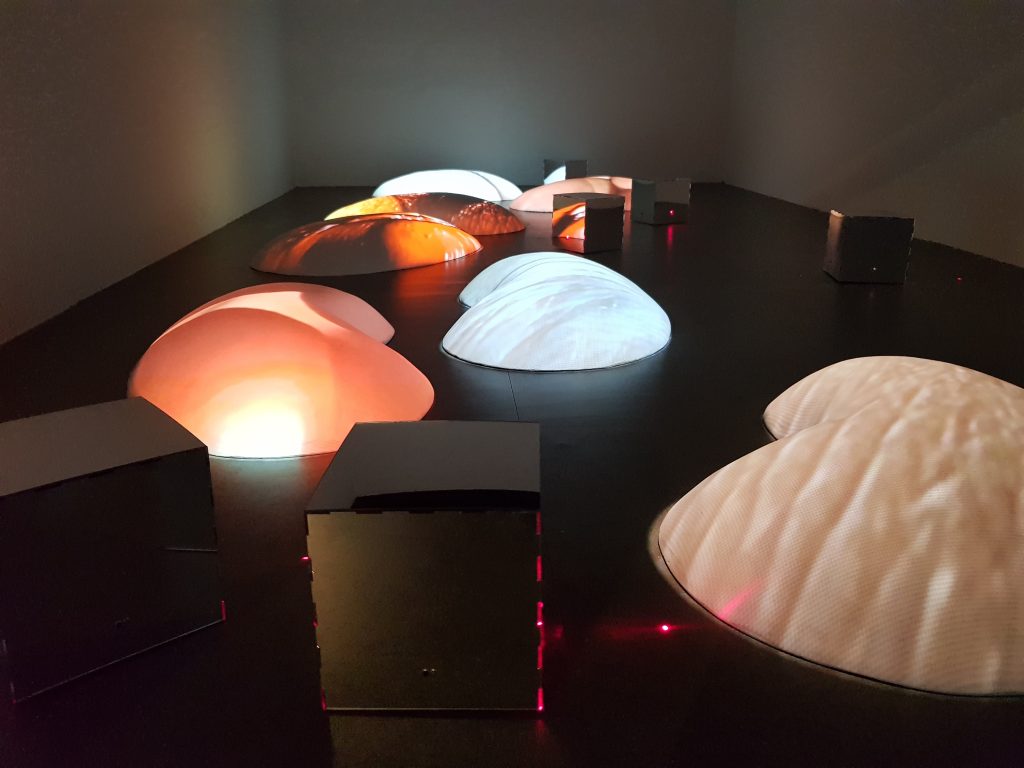 The installation explores the symbiotic relationship between the human body and the non-human mechanism in the contemporary techno-society. Mobile robots, sculptures with projected body images and immersive sounds construct a new body form, the dynamic hybrid context of the organic and the inorganic throughout the gallery. Viewers are invited to be a part of this synthesized body form by walking through sculptures and interacting with robots with different personality and behavior, while controlling the audiovisuals.

The Robot Symbiosis series starts with thinking about the state of the human body that is dispersed and expanded by media and technology. The work consists of 6-8 pieces of plaster sculpture on which the images of the body are projected and the robots roam between them. The audience contemplates the image of the body that is expanded and dispersed, or moves among the robots and the imagery of the body to finally complete the image of the technically sympathetic body.

This version of the work particularly emphasizes the interconnectedness of the human body and the non-human agents formulating the greater actor network. Based on Bruno Latour’s Actor Network Theory(ANT), the work demonstrates how human and the non-human agents such as robots, AIs and even mundane objects are related intimately and that it is inevitable to admit the symbiosis of human and nonhuman entities nowadays. The installation is the symbolic presentation of the current society in this view of actor network where human body, robots, things, audiovisual media are all intermingled.

Significantly magnified imagery of the human body is projected on to plaster pieces. Through the projection on to the sculptural form, the virtual body images acquire the quality of thingness, transiting from virtual dimension to tangible and spatial dimension. Around the plaster sculpture are robots moving around. Robots, in this version, look like mirror cube, giving more sense of thingness and materiality of construction block. Robots, however, are active agents with laser shooting toward projected sculptures, detecting the viewer and the sculpture, and constantly navigating through the space avoiding obstacles if needed. Viewers are invited to enter the space of this dispersed body imagery and the active thing agent of robots and interact with them, as a result creating and showing the greater actor network of human/nonhuman.

The artist intended to give viewers a moment to think over the issue of thingness and the non-human in relation to human and body in the time of non-human turn.